A LITTLE BIT ABOUT BOSSIER

Welcome to Bossier! Nestled on the banks of the Red River in Northwest Louisiana, Bossier City offers its residents a high quality of life that includes numerous recreational activities, rich in cultural experiences, and strong educational opportunities. Bossier City is an innovative and progressive community with big city amenities and small city charm.

For even MORE information on Bossier, check out our 2019-2020 Annual Manual. 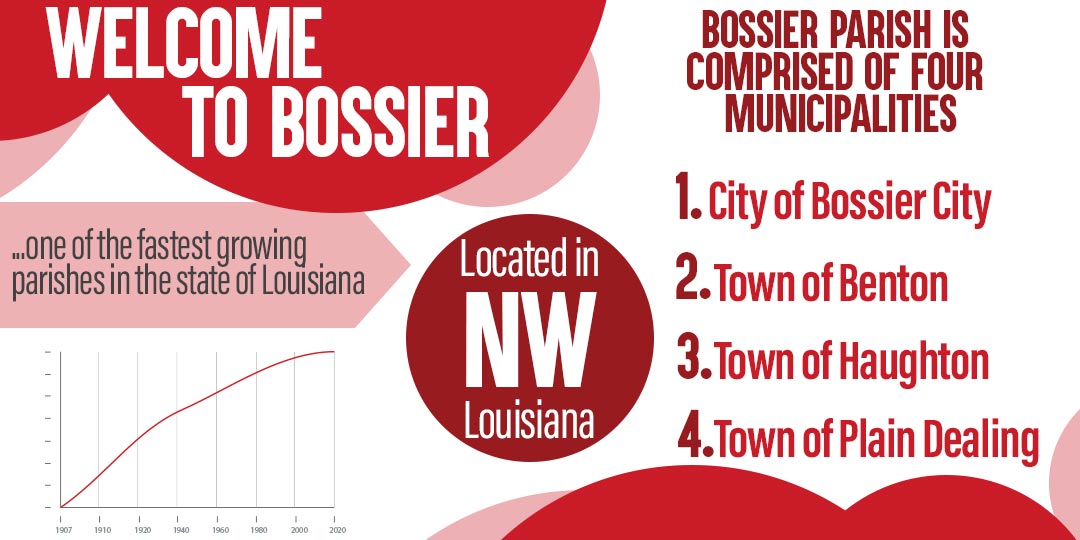 According to the C2ER ACCRA Cost of Living Index, the cost of living in Bossier-Shreveport is lower than several comparable cities.

Louisiana’s tax structure makes it the place to be for individuals and businesses. Much of the public funding is generated through sales tax, as is common in states with a robust tourism economy. This is a major advantage, and permits some of the lowest rates of corporate and individual income tax to be found in the country. Another tax advantage of being a resident is our advanced property tax configuration. The Homestead Exemption offers a $75,000 credit on primary residences, which makes it so much easier for singles and young families to purchase a home. 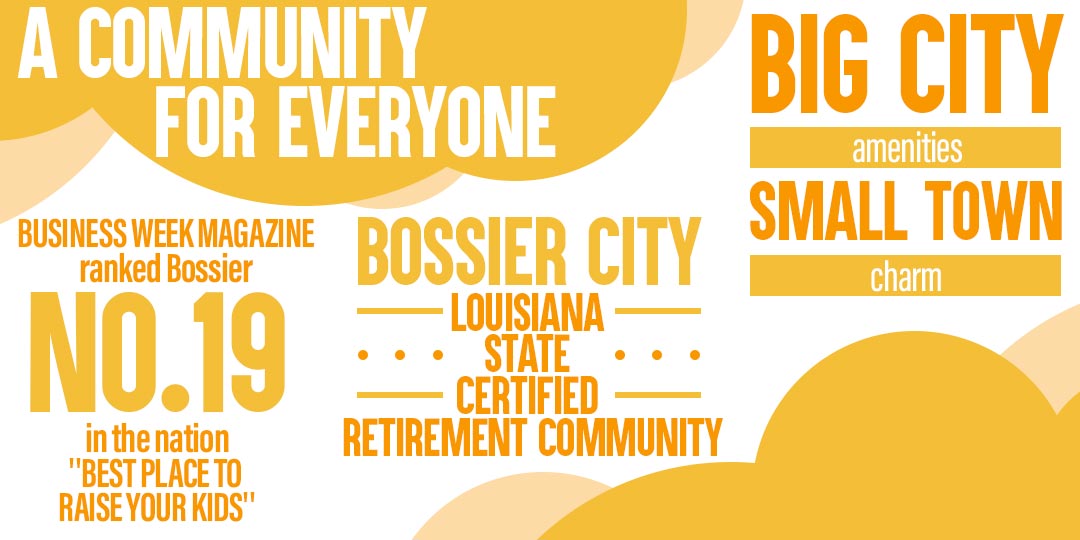 As you are getting ready to move into our area, we know that there are a lot of details to take care of that are necessary to make a smooth transition.  Here is a snapshot of what you might need right away.  You can find the full list and more information in the Bossier Relocation Guide.

Register the kids for school

Forms are available online at bossierschools.org/enrollment and you’ll need proof of residence, birth certificate and immunization shot records. Schedule a parent-teacher conference to get things started off right.

find your place of worship

If faith is an important part of your life, explore our local churches, temples, synagogues and mosques. Bossier and Shreveport have a wealth of places to worship so if your first selection isn’t a fit, you’ll likely find another right around the corner.

GET your vehicle registration and license plate

You’ll need your license or photo ID, proof of insurance and purchase, loan documents, odometer disclosure statement and loan documents, if financed. Complete the application and pay the fee at the Office of Motor Vehicles (318) 741-7113.

GET your Louisiana drivers license

Visit geauxvote.com for more information to register to vote and find your local polling place. You can register online or apply in person at the Bossier Parish Registrar of Voters in Benton. Make sure to bring an appropriate ID and proof of residency. 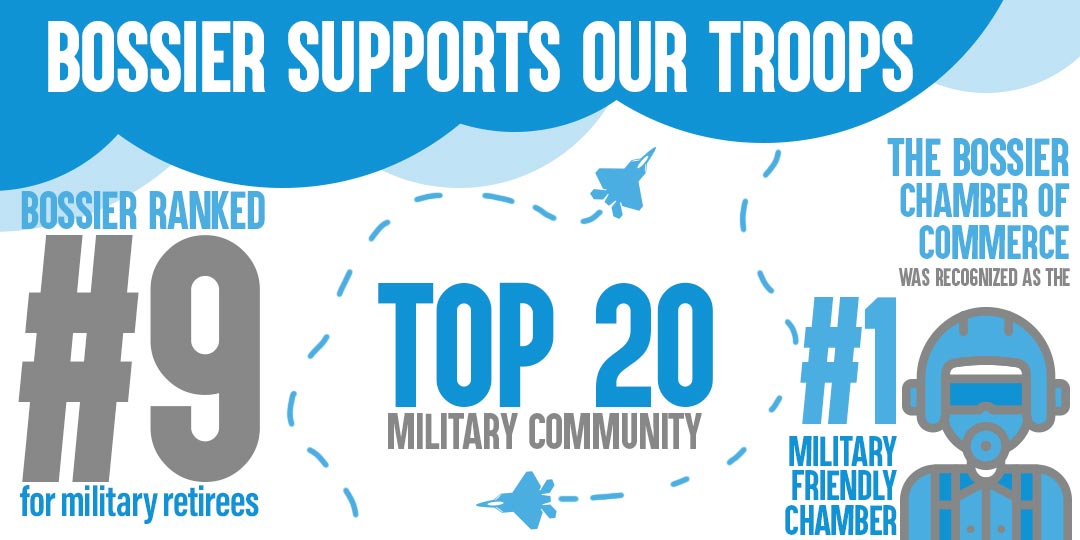 Bossier (pronounced “Bo-zhure”) City, like the rest of Louisiana State, has a dynamic, multicultural history life with Spanish and French influence. Bossier Parish was incorporated in 1843 and named after a famous Creole general in the Louisiana Militia. At the time, the area later to be known as Bossier City was called Cane’s Landing, the Elysian Groves Plantation of James and Mary Cane, and its location near the Red River induced commerce early on as steamboats of cotton, corn and potatoes were shipped to markets all over.

June 23, 1925 was the fateful day of a devastating fire that consumed half of downtown Bossier City, but with the loss came vast civic improvements such as a modern water system, a new City Hall, a modern fire alarm system, sidewalks and city parks. By 1950, Bossier City earned the title of “Fastest Growing City in Louisiana” despite the fire’s initial setbacks.

Bossier City, once widely known for its cotton exports, expanded and evolved into an airbase and oil boomtown. One of Bossier City’s most proud assets is Barksdale Air Force Base, originally the home of the “mighty” Eighth Air Force and more recently, home to Air Force Global Strike Command and a major reserve unit, the 307th Bomb Wing. Now, Bossier’s economic base continues to expand with the onset of tourism brought by the area’s several casinos, which add to the culture of this riverfront community. Sister city Shreveport has teamed up with Bossier City to provide an exciting and economically sound way of life for all residents without leaving behind its rich Creole charm.

If you want to follow along with Pierre Evariste John Baptiste Bossier, the General our wonderful city was named after, as he discovers all of the sights and attractions of modern day bossier CLICK HERE. 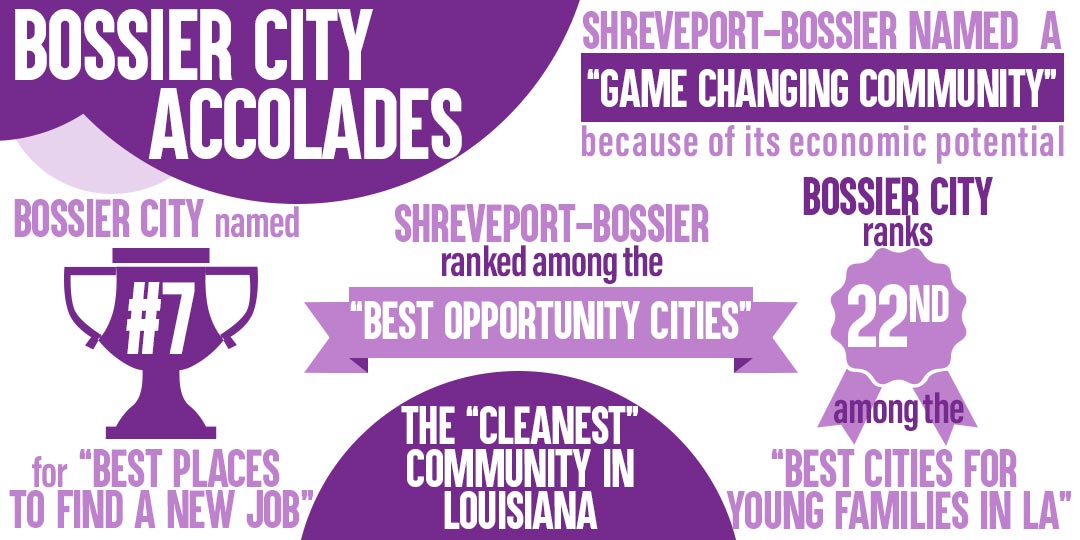 Bossier City is located in Northwest Louisiana, approximately 20 miles east of Texas and 35 miles south of Arkansas. Bossier City is located on the eastern bank of the Red River. The city is serviced by U.S. Interstates 20, 220, and 49, and U.S. Highways 71, 79, and 80. Geographically, Bossier City is well positioned on or near these major transportation corridors. The I-20 and I-49 interstates are heavily traveled commercial traffic corridors providing access to the east, west, and south. Another major interstate highway, I-30, lies 60 miles to the north at Hope, Arkansas, and is accessed by Louisiana State Highway 3. This interstate connects Bossier City to Little Rock, Arkansas, Memphis, Tennessee and other major cities to the northeast. Bossier City is centrally located among major southern cities. By ground travel, it is approximately three hours from Dallas, Texas; three hours from Little Rock, Arkansas; three hours from Jackson, Mississippi; five hours from Houston, Texas; and six hours from New Orleans.

The area is renowned for its commerce and the Port of Shreveport-Bossier acts as a major economic powerhouse, providing both domestic and international access to trade. Traveling by air is just as accessible, with Shreveport Regional Airport offering four airlines that provide flight service to Las Vegas, Houston, Dallas/Fort Worth, Atlanta, Memphis and more.